Do you remember the first deer you ever shot?

Derrick Ratliff, President and Founder of Horizon Firearms joins The Revolution this week fresh off of a Texas whitetail hunt with his wife and 5-year old son. Hunting on the same property that he has since his own youth, Derrick says they set up and hunted out of a pallet blind. As most hunters understand, a certain amount of anticipation builds as you watch a deer come in, wondering if you are going to get a shot on it. Their hunt had plenty of anticipation as they watched the deer walk down a tree line, make a scrape out of shooting range, walk too quickly through an opening for a shot, and finally making another scrape before a shot opportunity presented itself. In the end, Derrick’s son was able to bag a tremendous 8-point buck. (Congrats Rhyder!) 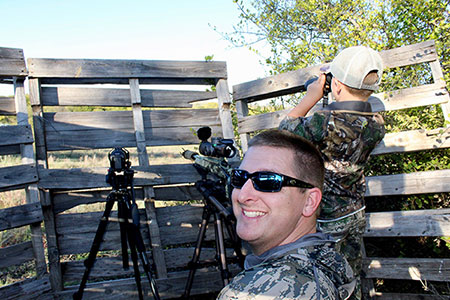 We are huge proponents of introducing kids to hunting early, not only letting them watch but also letting them participate. Kids often aren’t given enough credit for their ability to learn new skills. This story certainly proves just how possible it is with the right training, guidance and equipment. Derrick notes that his son has been working hard on his shooting for a year now. He learned on a custom 22 long rifle and about six months ago began to practice on Derrick’s personal 22 Creedmoor and is able to shoot out to 350 yards with accuracy. So, the 160-yard shot he took to tag the 8-point was impressive, and well within his wheelhouse. Derrick will talk about the ballistics and capabilities of the 22 Creedmoor. Furthermore, he’ll discuss how the addition of a suppressor is a great idea when hunting with kids.

Something that has to be considered when taking a child hunting is the recoil from the rifle they will be using and is it manageable or realistic for their smaller frame? In the case of the 22 Creedmoor, Derrick says the recoil is virtually non-existent and compares it with that of a .22-250 or less. When it comes to handling, Derrick says that because they were hunting out of a blind they were able to set his son up with a bench that holds both the front and rear of the rifle yet pivots in all directions. It provided him with a steady platform and allowed him to track and follow the deer. Having the right equipment can make a hunt easier, and in this case, it also makes it possible for kids to participate.

On the heels of this hunt, Derrick says that Horizon Firearms has a great barreled action deal happening. You can get a 22 Creedmoor barreled action for $1599. With the increasing popularity of this caliber, one that Horizon has been at the forefront of for so long, they wanted to give people an opportunity to get into it the right way. You get a 24-inch Benchmark barrel with a custom action for a cost-effective price. Plus, Derrick even teases the possibility of creating a youth model for people out there who are interested in getting kids into hunting but want and need a caliber that is effective without all the recoil.

Although November is upon us, it’s not too late to make some last-minute modifications to your rifle or even get into one of Horizon’s custom ready to ship rifles. If you are looking at possibly making some changes to your current setup Derrick says there is still time to do a full rebarrel project with their turnaround time. He urges hunters to pull out their rifles right now and think about how they ended their seasons last year. Was there anything you were dissatisfied with? All too often hunters don’t remember what they didn’t like about their rifle until they are afield again. This creates a last-minute crunch to fix things like a stock they didn’t like, a trigger that was too heavy, a scope they weren’t fond of or a gun with too much recoil. A little advance planning can make for a better hunting season and less pressure to correct issues.

When it comes to stocks, Derrick says that a custom stock can increase your accuracy. At iota, they make custom stocks. These custom stocks are stiffer than factory stocks and perform better as it relates to reducing recoil and muzzle jump. In totality, guns perform different when they have a better stock. Derrick will talk specifically about a new-comer to their iota line of stocks called the KLUTCH and highlight its adjustable cheek piece design that is built right into the stock.

Tune in as Derrick dives into the specifics of the rebarreling process in which customers can send their rifles to Horizon Firearms and for $999 they will blueprint the action, take measurements, put a brand-new barrel on it, bed it, shoot it and guarantee the accuracy. In the meantime, if you want to add more custom features like a fluted barrel or a new stock, that can be done as well. Derrick says that while you send in your old rifle, you are basically walking away with something brand new at the end of the rebarreling process and you get the same assurances and guarantees you do with a complete custom rifle when it comes to accuracy.

Be sure to check out Horizon’s special deal on the 22 Creedmoor Barreled Action as supplies are limited. Furthermore, if you have questions be sure to call and talk with the crew at Horizon Firearms. They are super knowledgeable, have top notch customer service, are easy to work with and can provide you with answers to any of your questions regarding custom rifle services, rebarreling and more. Take a listen and while you do, check out their work at www.HorizonFirearms.com, on Instagram and on Facebook. Plus, be sure to sign up for their newsletter as they send out special deals to subscribers.

More in this category: « Clarity: Riflescopes and Binoculars with Bushnell Yukon Moose and Grizzly Hunting with Tim Brent »
back to top